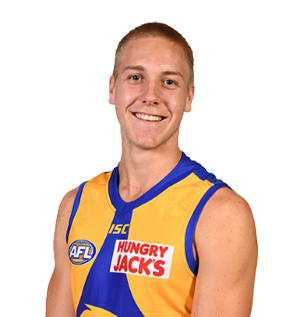 The West Australian forward was named the best player of the NAB AFL Under-18 Championships after a consistent carnival that saw him average 16 disposals, six marks and nearly three goals a game for his state.

After winning the Larke Medal, Allen went on to play at senior WAFL level for West Perth and then starred on AFL Grand Final morning in the NAB All Stars curtain-raiser game.

He again showed his marking ability and goal sense that day, finishing his impressive and consistent season with two goals from 18 disposals and seven marks.

Allen is a workhorse. In his role as a roaming tall forward, he continually presses up the field to present an option. And if he doesn’t get it, he doubles back and goes again for another lead until he has the ball in his hands.

He booted 11 goals over four games in the championships. He’s a steady shot for goal and can be relied upon to take his chances (he scored 25 out of a possible 30 points at the NAB AFL Draft Combine’s kicking test). The 18-year-old has excellent endurance and also tests solidly for pace at 3.07 seconds over 20 metres.