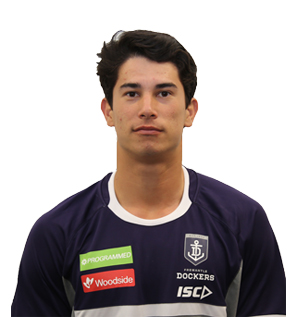 Bailey Banfield is a 19-year-old from Swanbourne in Perth.

He played as an inside midfielder and half forward for Claremont at League level in 2017 and had a tremendous season, culminating in him winning Claremont’s League Best and Fairest award after averaging 24 disposals, six tackles and six clearances per game.

Banfield was part of the WA side at the NAB AFL National Championships in 2016 and part of Claremont Colts premiership sides in 2015 and 2016.

A terrific character, highly respected by all and a future leader, Banfield is a pure ball magnet having 20+ disposals in 18 of his 20 League games in 2017.

With a strong body and powerful in a contest, Banfield is a first possession player at the stoppage and hard to stop at the clearances. He is highly regarded for ability to run both ways and applies very good defensive pressure.